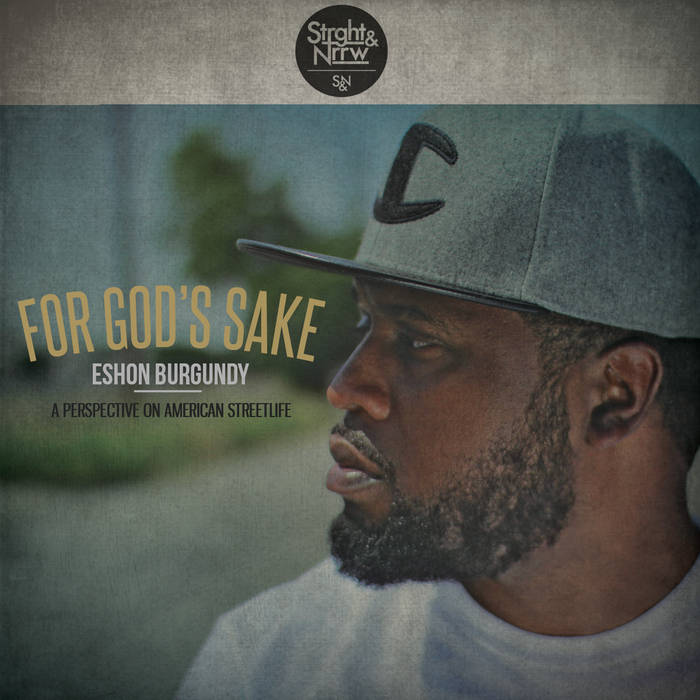 Was honored to jump on this remix of Jay Electronica's The Ghost of Christopher Wallace beat with my Comrades Eshon Burgundy & SAMG. This version only has Eshon and I's verse as it was mixed separately. Get the entire version, along with Eshon Burgundy's "For God's Sake" Mixtape for free here: noisetrade.com/eshonburgundy/for-gods-sake

Came out my momma,
with nothing but black skin on me,
that was enough,
to make folk hate, and wanna harm me.
Thats appalling, dark twisted wrong cold,
Chip on my shoulder
Frito laying on the side of the road (Chip = Frito Lay, Shoulder = side of the highway)
cause this world taught me
that stuff makes you more
and my soil was on welfare
I was dirt poor,
so I wanted that,
thinking money would sooth
it wouldn't, but I knew not (knot),
tying my shoe.
surely headed for forever,
down the wrong path,
with the wrong goal,
Nate Robinson (NBA player who notoriously shot in the wrong goal)
soul indebted,
to the pleasures of the Lord's wrath,
but the Lord rose to replace that,
astonishing.
yet here we are,
still slaves to this flesh,
taking shots, (Drinking, also taking bullets)
Pop Molly - she wearing a vest. (Pop = shoot, she is wearing a vest, can hurt her, she only hurts you)

I Guess,
This mess,
Rest in our Genes (Jeans – Guess)
Sleeping Pooh,
But we can Bear, Honey (Winnie)
Trust in the King,
Who Rode on Donkey,
Shrek, thats a Mic,
On Eeyore, (Rode is the name of a Microphone brand, Eeyore is the name of the donkey on Winnie the Pooh)
Emergency urgent,
This call ER
Healed by his stripes,
running this race in adidas, (Heel/Foot/Running/Stripes/Adidas)
cities our track, we rap,
That’s Big Tigger (BET Show Rap City Host – Big Tigger/Tiggor – Completes Winnie the Pooh Reference)

Lets war to be abhorred,
by this world, that we live in,/
soar to adore, the lord of lords,
and be stitched in,/
become apart of this Armie,
Blood Bought, get stitched in,/
be about his vision,
bait, gone fishing,/
crazy about this mission,
bates, norman,
have to switch it up,/
thats lights on,
get the vision?/
its time to raise Kane (Wrestler also)
that champagne in my cups through
Armor on? YES/
Daniel Bryan in the Mark II (DB is a Wrestler whose catchphrase is Yes!/Mark II Iron Man Armor).
Salute.